Clipping is a surgery performed to treat an aneurysm — a balloon-like bulge of an artery wall. As an aneurysm grows it can become so thin that it leaks or ruptures, releasing blood into the spaces around the brain. A neurosurgeon opens the skull (craniotomy) and places a tiny clip across the neck of the aneurysm to stop or prevent it from bleeding.

What is aneurysm clipping?

The goal of surgical clipping is to isolate an aneurysm from the normal circulation without blocking off any small perforating arteries nearby. Under general anesthesia, an opening is made in the skull, called a craniotomy. The brain is gently retracted to locate the aneurysm. A small clip is placed across the base, or neck, of the aneurysm to block the normal blood flow from entering. The clip works like a tiny coil-spring clothespin, in which the blades of the clip remain tightly closed until pressure is applied to open the blades. Clips are made of titanium and remain on the artery permanently. 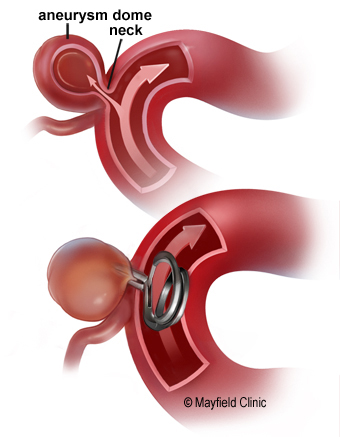 Figure 1. Most aneurysms resemble a balloon, with a narrow neck at its origin and a large expanding dome. During surgery, a clip is placed across the neck of the aneurysm to prevent blood from entering. 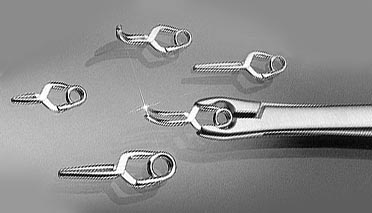 Figure 2. Aneurysm clips come in a variety of sizes and curves. A clip applier opens the blades of the aneurysm clip.

Who is a candidate?

The choice of aneurysm treatment (observation, surgical clipping or bypass, or endovascular coiling) must be weighed against the risk of rupture and the overall health of the patient. Because clipping involves the use of anesthesia and surgically entering the skull, patients with other health conditions or who are in poor health may be treated with observation or coiling.

Clipping may be an effective treatment for the following:

Ruptured aneurysms burst open and release blood into the space between the brain and skull, called a subarachnoid hemorrhage (SAH). The risk of repeated bleeding is 22% within the first 14 days after the first bleed. So, timing of surgery is important - usually within 72 hours of the first bleed.

Unruptured aneurysms may not cause symptoms and are typically detected during routine testing for another condition. The risk of aneurysm rupture is about 1% per year but may be higher or lower depending on the size and location of the aneurysm. However, when rupture occurs, the risk of death is 40%, and the risk of disability is 80%.

The treatment decision for observation, surgical clipping or bypass, or endovascular coiling or flow diversion largely depends on the aneurysm’s size, location, and neck geometry. The less invasive nature of coiling is likely to be favored in patients who are older, are in poor health, have serious medical conditions, or have aneurysms in certain locations. In patients younger than 40 years of age, the difference in the safety between coiling versus clipping is small. Therefore, the better long-term protection from bleeding may give patients with clipped aneurysms an advantage in life expectancy.

Comparing the long-term results of coiling versus clipping of aneurysms is an area of ongoing study. Clipping has proven its long-term effectiveness over several decades. Coiling is a relatively new technique (since 1990s) and its long-term protection against rebleeding is not known. The International Subarachnoid Aneurysm Trial (ISAT) explored this topic over a period of years (1994-2007) [1,2]. But because the study was limited to ruptured aneurysms and included a very select group of patients, its results cannot be applied to all aneurysm patients. Therefore, the best treatment option remains highly individualized. Discuss with your doctor the technique most appropriate for your specific case.

Who performs the procedure?

Surgical clipping is performed by a neurosurgeon. Many neurosurgeons have specialized training in cerebrovascular surgery. Ask your surgeon about their training, especially if your case is complex.

What happens before surgery?

A ruptured aneurysm is life threatening - you may be taken immediately to the operating room after the doctors have located the aneurysm and your blood pressure is stabilized. To decrease blood pressure doctors may use medication, hyperventilation on a breathing machine, or sedation. An arterial pressure (AP) line may be inserted into your arm to monitor blood pressure. Visits with your loved one may be restricted in order to create a calm environment with little stimulation.

If you have an unruptured aneurysm, you will be scheduled for presurgical tests (e.g., blood test, electrocardiogram, chest X-ray) several days before surgery. In the doctors office you will fill out paper work and sign consent forms so that your surgeon knows your medical history (i.e., allergies, medicines, anesthesia reactions, previous surgeries). You should stop taking all non-steroidal anti-inflammatory medicines (Naproxen, Advil, etc.) and aspirin one week before surgery.

Patients are admitted to the hospital the morning of the procedure. No food or drink is permitted past midnight the night before surgery. An intravenous (IV) line is placed in your arm. An anesthesiologist will explain the effects of anesthesia and its risks.

What happens during surgery?

There are six steps to the procedure. The operation generally takes 3-5 hours or longer if a complex craniotomy is planned.

You will lie on the operating table and be given general anesthesia. After you are asleep, your head is placed in a three-pin skull fixation device, which attaches to the table and holds your head in position during surgery. Next, the incision area of the scalp is prepped. Skin incisions are usually made behind the hairline. A hair sparing technique is used, where only a 1/4-inch wide area along the proposed incision is shaved. Sometimes the entire incision area may be shaved.

A lumbar drain may be inserted in your lower back to remove cerebrospinal fluid (CSF) and allow the brain to relax during surgery. A brain-relaxing drug (mannitol) may be given.

Depending on the location of your aneurysm, a bone flap, or craniotomy, will be made in your skull. There are many types of craniotomies. Ask your surgeon to describe exactly where the skin incision will be made and the bone to be removed. 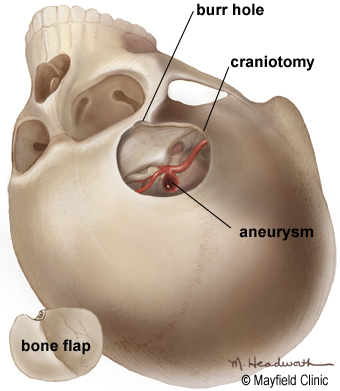 Figure 3. A craniotomy is made in the skull over the area where the aneurysm is located. The bone flap is lifted and temporarily removed.

After your scalp is prepped, the surgeon will make a skin incision to expose the skull. The skin and muscles are lifted off the bone and folded back. Next, small burr holes are made in the skull with a drill. The burr holes allow entrance of a special saw called a craniotome. Similar to using a jigsaw, the surgeon cuts an outline of a bone window (Fig. 3). The cut bone flap is lifted and removed to expose the protective covering of the brain, called the dura mater. The bone flap is safely set aside and will be replaced at the end of the procedure.

The dura is opened to expose the brain. Retractors may be used to gently open a corridor between the brain and skull. Working under an operating microscope, the surgeon carefully locates the artery and follows it to the aneurysm.

Before placing the clip, the surgeon obtains control of the blood flow in and out of the aneurysm. Handling of the aneurysm, especially the dome, can cause rupture. Should rupture occur during surgery, a temporary clip can be placed across the parent artery to stop the bleeding. Depending on the aneurysm size and location, vascular control may be obtained at the carotid artery in the neck through a separate incision.

The aneurysm neck is prepared for clipping. Often the aneurysm is held tight by connective tissue and must be freed and isolated from other structures. Small arteries called perforators must be noted so they are not included in the clip. The clip is held open with a tweaser-like applier and placed across the aneurysm neck. Once released, the jaws of the clip close pinching off the aneurysm from the parent artery (Fig. 4). Multiple clips may be used. The clip is made of titanium and remains on the artery permanently. 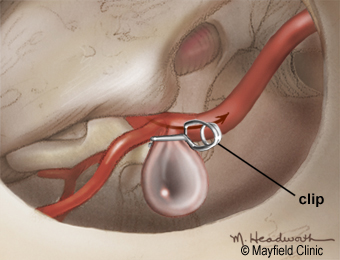 Figure 4. A titanium clip is placed across the neck of an aneurysm preventing blood from entering. Without blood flow, the aneurysm will eventually shrink. The clip is made of titanium and remains on the artery permanently.

The surgeon inspects the clip to make sure it is not narrowing the parent artery or has other arteries in its jaws. The dome of the aneurysm is punctured with a needle to make sure blood is no longer filling it. Intraoperative angiography may be performed to confirm blood flow through the parent artery.

The dura is closed with sutures. The bone flap is replaced and is secured to the skull with titanium plates and screws. The muscles and skin are sutured back together. A soft adhesive dressing will be placed over the incision.

After surgery you'll be taken to the recovery room, where vital signs are monitored as you awake from anesthesia. Then you'll be transferred to the neuroscience intensive care unit (NSICU) for observation and monitoring. Pain medication will be given as needed. You may experience nausea and headache after surgery; medication can control these symptoms.

After 24 to 48 hours, unruptured aneurysm patients are usually transferred to the neurological floor. Monitoring will continue as you increase your activity level. In a few days you'll be released from the hospital and given discharge instructions.

Ruptured aneurysm patients stay in the NSICU for 14 to 21 days and are monitored for signs of vasospasm, which is a narrowing (spasm) of an artery that may occur 3-14 days following a SAH. Signs of vasospasm include arm or leg weakness, confusion, sleepiness, or restlessness (see SAH).

No surgery is without risk. General complications related to brain surgery include infection, allergic reactions to anesthesia, stroke, seizure, and swelling of the brain. Complications specifically related to aneurysm clipping include vasospasm, stroke, seizure, bleeding, and an imperfectly placed clip, which may not completely block off the aneurysm or blocks a normal artery unintentionally.

Several studies have suggested that memory loss and cognitive disability is more common after craniotomy for aneurysm clipping than after endovascular coiling, especially in patients over 50.

What are the results?

Aneurysms that are completely clipped have an extremely low risk of regrowth. However, if the aneurysm has been partially clipped, patients need to have periodic angiograms to make sure the aneurysm is not growing. Ask your neurosurgeon about the need for radiologic follow-up.

Aneurysm patients may suffer short-term and/or long-term deficits as a result of a rupture or treatment. Some of these deficits may disappear over time with healing and therapy. For ruptured aneurysms, the recovery process may take months or years to understand the deficits you incurred and regain function.

Today most aneurysm clips are made of titanium and are not detected by security gates. However, it is very important to know if your clip is MRI compatible before undergoing an MRI scan. You must check your clip lot number with the manufacturer. The clip lot number is obtainable from the operative notes at the hospital where you underwent surgery.

aneurysm: a bulge or weakening of an artery wall.

angiogram: a type of X-ray that takes pictures of blood vessels with the help of contrast dye injected via a catheter.

dura mater: a tough, fibrous, protective covering of the brain.

vasospasm: abnormal narrowing or constriction of arteries due to irritation by blood in the subarachnoid space.