When a Spinal Cord Stimulator Fails, the Device, the Body, or the Mind May Be To Blame

CINCINNATI – For many people who suffer chronic, debilitating pain in the lower back or limbs, the implantation of a spinal cord stimulator can be a life-changer. By delivering electrical pulses that interrupt pain signals from the affected area to the brain, this device can improve patients' quality of life and reduce their need for medication.

Although spinal cord stimulation is a well-established treatment that has helped thousands of patients with chronic pain syndromes, it is not effective in all cases.

Researchers from Mayfield Brain & Spine explored the reasons why spinal cord stimulator systems were removed in 129 patients over a period of 9 years (2005-2013) and published their findings in the Journal of Neurosurgery: Spine. Led by Mayfield neurosurgeons George Mandybur, MD, and Yair Gozal, MD, PhD, the retrospective study found that stimulator systems were removed because of certain surgical or device-associated complications, such as an infection, or because the system no longer provided relief.

By performing the study, the physicians aimed "to shed light on potential avenues to reduce morbidity and improve patient outcomes."

Of the 129 patients in the study, 72 had their devices implanted by Mayfield surgeons, and 57 had their devices implanted by other practitioners. Pre-implantation trials to determine efficacy were performed on all patients treated at Mayfield. Half of the patients were legally disabled, and the most common cause of their chronic pain was flat back syndrome, a complication that can occur following multiple spine surgeries.

The 15 patients who had their stimulators removed quickly, in a median time of 2 months, typically suffered an acute post-surgical complication, such as infection. For most patients in the study, however, the system was removed after a longer period of time because of ineffectiveness, loss of stimulation, infection, or the migration of the stimulator electrodes that were placed over the spinal cord.

"Patients with depression and anxiety were more likely to undergo removal of the device within a year of treatment than after a year of treatment," Dr. Gozal observed. "If you consider the patients who had formal psychiatric evaluations and look at their rates of comorbid psychiatric diseases, 64 percent had major depression and 35 percent had anxiety. It's not clear, however, whether pain was causing these patients to have higher levels of depression."

Dr. Gozal said that patients with pain in general have a higher presence of psychiatric disorders and that more research is needed to understand the role that psychiatric issues play in an individual's perception and accommodation of pain.

"Patients who have these comorbid psychiatric issues tend to not have as efficacious an experience with the spinal cord stimulator," Dr. Gozal said. "People with a dysfunctional coping profile are likely not receiving as much benefit. They're more likely to feel their spinal cord stimulator is not working properly and have it removed. This is a population for whom it's just not working as effectively."

A 2015 study, published by Cleveland researchers in Neuromodulation: Technology at the Neural Interface, found that of 234 patients who underwent implantation of spinal cord stimulation devices from 2007 to 2013, 56 patients had their devices removed (23.9 percent) over the next eight years.

*** Disclosures: Drs. Gozal and Mandybur have no disclosures. 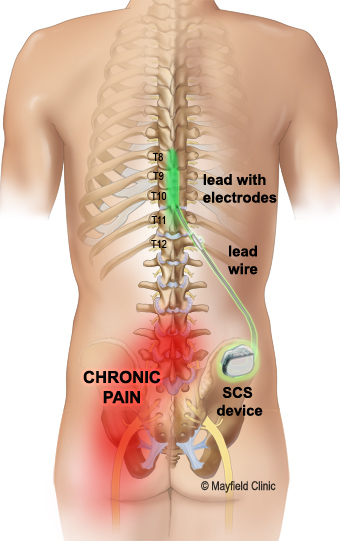