CINCINNATI– William Tobler, MD, of Mayfield Brain & Spine recently became the first surgeon in the United States to perform a sacroiliac joint (SI) fusion at an outpatient spine surgery center using the RIALTO™ system with O-arm® and Stealth Technology 3-D navigation. The patient went home to recuperate a few hours after the one-hour procedure was completed.

The navigated O-arm® technology is an advanced technology that provides high-resolution CT images of the spine and surgical site before, during and immediately after surgery. It is marketed by Medtronic.

The RIALTO SI fusion system, a set of specialized fixation screws that accommodate patient anatomy, is also marketed by Medtronic. “The advanced O-arm imaging device, when used with navigation technology, enabled me to do a sacroiliac fusion at Mayfield’s Spine Surgery Center,” Dr. Tobler says. “We have used the O-arm at the Spine Surgery Center before, but never for an SI fusion. This was a fantastic way to do this particular procedure.”

The benefits of using the O-arm during an SI fusion, Tobler says, include improved visibility and safety. The procedure involves the placement of titanium implants and bone graft material to stabilize the joint and promote bone growth. 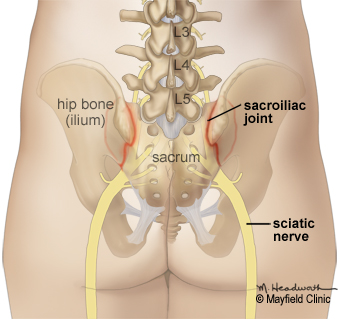 The SI joints, which connect the spine to the hips, provide support and stability. They also absorb impact when an individual walks or lifts an object. Sacroiliac pain can occur when bones become arthritic and ligaments stiffen during the aging process.

Typically, SI joint fusion has been performed in a hospital setting, with patients staying overnight and going home the next day. “Performing the SI fusion at the Spine Surgery Center is significant, because it demonstrates our ability to perform more and more sophisticated surgeries at an ambulatory center.

Mayfield acquired the O-arm® system in 2016.