Through Study of Anatomy, Mayfield Neurosurgeon Seeks Safest Pathway to Tumors of the Skull Base

Tread carefully. That is one of the most important rules for neurosurgeons who operate in the lower part of the brain, a complex and congested region of vessels, nerves, and bony structures called the skull base. It is a region where millimeters matter, where a wrong turn or an errant poke can produce dangerous complications.

It is an area of the brain that continues to fascinate Norberto Andaluz, MD, a skull base neurosurgeon with Mayfield Brain & Spine. He is the principal investigator of three recent publications, two in the journal Operative Neurosurgery and one in the Journal of Neurosurgery. All provide new practical insights into treating skull base tumors in the anterior (front) part of the head, near the eye.

“We are looking for the least aggressive way of approaching a tumor,” Dr. Andaluz says. “We want the best outcomes, the least disfiguring surgeries, and the quickest recoveries for our patients."

“These tumors are very difficult to treat. One of the goals of surgery is to save the patient from going blind when the tumor is in proximity of the optic nerve.”

In the studies, Dr. Andaluz and his team studied the potential for incorporating traditional surgical approaches with newer endoscopic approaches through the nose and eyelid. In one study, Dr. Andaluz and his fellow researchers compared two different approaches to decompression (opening up space) of the bony optic canal, through which the optic nerve passes. The nerve can become compressed, or squeezed, as a tumor grows.

“Historically, decompression was done through a transcranial approach, where we open the patient’s head and open the roof above the orbit and the optic nerve canal,” Dr. Andaluz says. “The problem is that sometimes the tumor is blocking the surgeon’s view of the optic nerve, so you have to perform a very large approach in a riskier setting. In these situations, the optic nerve may be inseparable from the tumor, or at a very significant risk for damage due to excessive manipulation and loss of blood supply.”

If this approach to the optic canal cannot be done safely through the transcranial alley, Dr. Andaluz continues, “Another way to treat the compression is to go through the nose.”

In a laboratory setting, the surgeons decompressed optic canals with a traditional surgical approach, which required making an opening in the skull, and a less invasive approach, which involved advancing long, narrow instruments through the nose. Importantly, they studied not whether the approach could be made, but whether it could be done without causing harm to the patient.

“One of the risks of doing this decompression through the nose or skull is that you can violate the seals that hold the cerebrospinal fluid,” Dr. Andaluz says. “What we did was study specifically how much we can afford to decompress both from the transcranial and from the endonasal route without causing complications of cerebrospinal fluid leakage.”

Dr. Andaluz and his team concluded that the traditional approach provided neurosurgeons with “ample visualization and wide exposure,” while limiting the risk of causing a cerebrospinal fluid leak. The endonasal approach, by comparison, offered a narrower window of visibility. “Although endoscopic endonasal approaches have gained popularity, they may not always be what is best for an individual patient,” Dr. Andaluz says. “The real value here is to demonstrate both techniques and be able to offer the one that may more safely decompress the optic nerve without exposing the patient to excessive risks.”

In a second study, Dr. Andaluz and his colleagues studied orbital routes used to reach rare tumors of the orbital cavity and its surroundings inside the skull. They sought an optimal route that might reduce the amount of brain retraction and bone removal normally required. The surgeons drew on the experience of ophthalmologists to compare minimally invasive approaches into deep and complex regions of the central brain (the middle cranial fossa).

“We’ve seen techniques in those areas where you cannot get a good reach from either the nose or through the head,” Dr. Andaluz says. “We looked at different ways and different routes.”

Although the study is “very preliminary,” Dr. Andaluz says it gave the surgeons ideas about how to treat rare tumors in this hard-to-reach region by approaching through a small incision in the upper eyelid.

In a third study, Dr. Andaluz and his team combined established routes to orbital tumors into a novel, minimally invasive approach. The surgeons concluded that approaching tumors through a keyhole incision in the eyelid allowed good visualization of structures in the medial brain but that future studies were needed.

Dr. Andaluz says he wants his anatomical research to have practical, clinical implications. “I want to see how much I can do for my patient.”

Supraorbital vs Endo-Orbital Routes to the Lateral Skull Base: A Quantitative and Qualitative Anatomic Study was published by the journal online in February 2018.

“Endoscopic transorbital superior eyelid approach: anatomical study from a neurosurgical perspective” was published online in the Journal of Neurosurgery in December 2017.

Authors of the three research studies included Lee Zimmer, MD, PhD, of the Department of Otolaryngology-Head and Neck Surgery at the University of Cincinnati (UC), and Jeffrey T. Keller, PhD, of the UC Department of Neurosurgery. Steven Gogela, MD, a former neurosurgery resident at UC, was a co-author of the optic nerve decompression study. Researchers of the supraorbital vs endo-orbital study and the endoscopic transorbital superior eyelid approach study included Paolo Cappabianca, MD, of the Universita degli Studi di Napoli Federico II, of Naples, Italy. 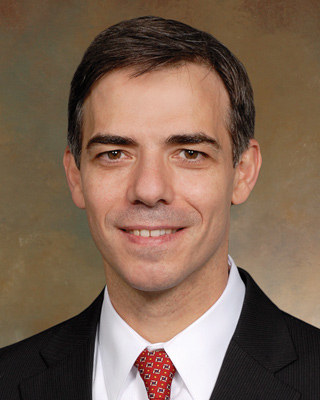 An illustration for a publication by Dr. Andaluz appeared on the cover of Operative Neurosurgery. Illustration by Tonya Hines, CMI.