CINCINNATI –Fueled by the hope of finding better treatments, patients like Kenneth Jacques are helping medical science map the entire genetic sequence of a few types of brain tumors.

Those tumors include Grade 3 gliomas, an uncommon type of brain malignancy that struck Mr. Jacques in September 2011. At that time, the West Chester, Ohio, engineer and father of two made two decisions. One was to get well. The other was to give back by enrolling in the genetic sequencing study, also known as The Cancer Genome Atlas Trial, at the Brainu Tumor Center at the University of Cincinnati (UC) Neuroscience Institute.

As a participant in the study, Mr. Jacques donated tissue from his tumor to be used for genetic sequencing.

"Our goal is to map out a tumor's entire genome to identify potential areas at the molecular level that are abnormal and that could be targets for therapies of the future," says Christopher McPherson, MD, a neurosurgeon with the Mayfield Clinic and UC Brain Tumor Center and Director of the Division of Surgical Neuro-Oncology at the UC College of Medicine. "We are extremely interested in developing sophisticated drugs that target specific differences within cancer cells. As of now, we don't have a lot of good treatments for patients with these particular tumors."

The Cancer Genome Atlas Study, a project of the National Cancer Institute and the National Human Genome Research Institute, involves a network of institutions throughout the United States, including clinical sites, a specimen processing facility and genomic characterization centers.

Dr. McPherson, principal investigator of Cincinnati's portion of the study, stresses that the search for targets in genetic or protein abnormalities is a very important step but only the earliest phase of discovery. "We have to identify the targets before we can identify the drugs to use," he says.

"We send tissue specimens to NIH and don't get the answers back right away. They have to study and process the tissue. But this study holds promise for the future. As abnormal areas are identified, treatments will be developed, and then we will be able to provide clinical trials."

The Cancer Genome Atlas was launched in 2006 with a pilot study of three types of tumors: glioblastoma multiforme (a Grade 4 glioma), serious cystadenocarcinoma of the ovary, and squamous cell carcinoma of the lung. Researchers hoped to learn whether such a comprehensive analysis would be feasible as well as beneficial. The pilot study was so successful that additional cancer types, including Grade 3 glioma, were added in 2010. The UC Brain Tumor Center began enrolling patients in 2011.

"Glioma is a broad term that encompasses all of the tumors that come from the glial cell, a supporting cell in the brain," Dr. McPherson says. "Any of the glial cells can become tumors. Astrocytoma, ependymoma, oligodendroglioma: all are different types of gliomas. Gliomas are graded on a scale of one to four."

"Research has enabled us to see the step-wise progression of mistakes that occur as a tumor evolves from a low-grade glioma to a Grade 3 to a glioblastoma," Dr. McPherson says. "We have already identified some of those errors; but these discoveries have not been as fruitful as we would wish. We hope that by mapping entire genome we will find more answers for potential treatment."

Mr. Jacques's symptoms began as mini seizures, "brief spells where I started to feel like I was going to pass out, but I never did." Shortly after an incident in which he was supposed to talk to his son about breakfast but instead began talking about work, he called the doctor. An MRI revealed the tumor, an anaplastic astrocytoma, in an "eloquent" area in the left side of his brain, near the areas responsible for speech.

After discussing Mr. Jacques's situation at the weekly Multidisciplinary Tumor Board Conference, the Brain Tumor Center team settled on a strategy that including careful three-dimensional mapping of the tumor as well as the critical functional centers and electrical pathways in Mr. Jacques's brain. Dr. McPherson then operated, removing as much of the tumor as possible, while Mr. Jacques was awake. Surgery was followed by 33 radiotherapy treatments at the Precision Radiotherapy Center in West Chester, Ohio, and chemotherapy.

Mr. Jacques says he was informed about ongoing clinical trials around the time of his surgery. "I accepted the opportunities as a way to help others," he says. "That is a part of who I am."

"Basically, the importance of research is what we can develop for the future," Dr. McPherson says. "Mr. Jacques is allowing his tissue to be studied and looked at for treatment that will hopefully benefit him -- but if not him, then future generations. Every person with brain cancer should be involved in research because we still don't have good treatment options."

The UC Brain Tumor Center (in collaboration with the Mayfield Clinic) is joined by three other Ohio centers in The Cancer Genome Atlas study: Case Western Reserve University and University Hospitals Case Medical Center; the Brain Tumor Center at the Cleveland Clinic Foundation; and the Department of Neurosurgery at the Wexner Medical Center at Ohio State University. These four Ohio centers are simultaneously taking part in the Ohio Brain Tumor Study, which seeks to determine risk factors for brain tumors.

For more information about research and clinical trials at the UC Brain Tumor Center, please contact Alison Kastl at kastla@ucmail.uc.edu or (513) 584-0436.

* * *
The Mayfield Clinic is recognized as one of the nation's leading physician organizations for clinical care, education, and research of the spine and brain. Supported by 21 neurosurgeons, six neurointensivists, an interventional radiologist, six physical medicine & rehabilitation specialists, and a pain specialist, the Clinic treats 25,000 patients from 35 states and 13 countries in a typical year. Mayfield's physicians have pioneered surgical procedures and instrumentation that have revolutionized the medical art of neurosurgery for brain tumors and neurovascular diseases and disorders. 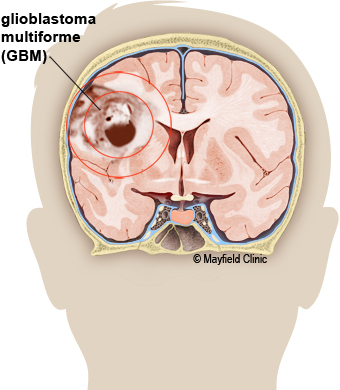 A Grade 4 glioma, the most malignant, is a glioblastoma multiforme, so named because each individual cancer can include many different genetic forms and aberrations.