Intracerebral hemorrhage (ICH) is caused by bleeding within the brain tissue itself — a life-threatening type of stroke. A stroke occurs when the brain is deprived of oxygen and blood supply. ICH is most commonly caused by hypertension, arteriovenous malformations, or head trauma. Treatment focuses on stopping the bleeding, removing the blood clot (hematoma), and relieving the pressure on the brain.

What is an intracerebral hemorrhage (ICH)?

Tiny arteries bring blood to areas deep inside the brain (see Anatomy of the Brain). High blood pressure (hypertension) can cause these thin-walled arteries to rupture, releasing blood into the brain tissue. Enclosed within the rigid skull, clotted blood and fluid buildup increases pressure that can crush the brain against the bone or cause it to shift and herniate (Fig. 1). As blood spills into the brain, the area that artery supplied is now deprived of oxygen-rich blood – called a stroke. As blood cells within the clot die, toxins are released that further damage brain cells in the area surrounding the hematoma. 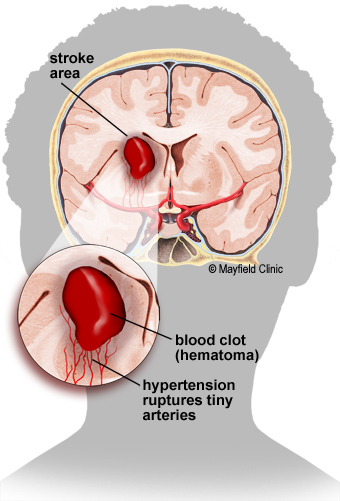 An ICH can occur close to the surface or in deep areas of the brain. Sometimes deep hemorrhages can expand into the ventricles – the fluid filled spaces in the center of the brain. Blockage of the normal cerebrospinal (CSF) circulation can enlarge the ventricles (hydrocephalus) causing confusion, lethargy, and loss of consciousness.

If you experience the symptoms of an ICH, call 911 immediately! Symptoms usually come on suddenly and can vary depending on the location of the bleed. Common symptoms include:

Ten percent of strokes are caused by ICH. ICH is twice as common as subarachnoid hemorrhage (SAH) and has a 40% risk of death. ICH occurs slightly more frequently among men than women and is more common among young and middle-aged African Americans and Japanese. Advancing age and hypertension are the most important risk factors for ICH. Approximately 70% of patients experience long-term deficits after an ICH.

When a person is brought to the emergency room with a suspected brain hemorrhage, doctors will learn as much about his or her symptoms, current and previous medical problems, medications, and family history. The person's condition is assessed quickly. Diagnostic tests will help determine the source of the bleeding.

Computed Tomography (CT) scan is a noninvasive X-ray to review the anatomical structures within the brain and to detect any bleeding. CT angiography involves the injection of contrast into the blood stream to view arteries of the brain.

Angiogram is an invasive procedure, where a catheter is inserted into an artery and passed through the blood vessels to the brain. Once the catheter is in place, contrast dye is injected into the bloodstream and X-rays are taken.

Magnetic resonance imaging (MRI) scan is a noninvasive test, which uses a magnetic field and radio-frequency waves to give a detailed view of the soft tissues of your brain. An MRA (Magnetic Resonance Angiogram) involves the injection of contrast into the bloodstream to examine the blood vessels as well as the structures of the brain.

Treatment may include lifesaving measures, symptom relief, and complication prevention. Once the cause and location of the bleeding is identified, medical or surgical treatment is performed to stop the bleeding, remove the clot, and relieve the pressure on the brain. If left alone the brain will eventually absorb the clot within a couple of weeks – however the damage to the brain caused by ICP and blood toxins may be irreversible.

Medical treatment
The patient will stay in the stroke unit or intensive care unit (ICU) for close monitoring and care.

Surgical treatment
The goal of surgery is to remove as much of the blood clot as possible and stop the source of bleeding if it is from an identifiable cause such as an AVM or tumor. Depending on the location of the clot either a craniotomy or a stereotactic aspiration may be performed. 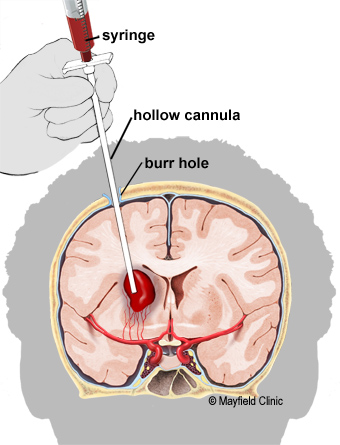 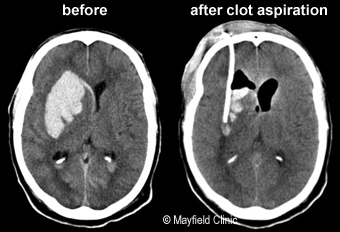 Immediately after an ICH, the patient will stay in the intensive care unit (ICU) for several weeks where doctors and nurses watch them closely for signs of rebleeding, hydrocephalus, and other complications. Once their condition is stable, the patient is transferred to a regular room.

ICH patients may suffer short-term and/or long-term deficits as a result of the bleed or the treatment. Some of these deficits may disappear over time with healing and therapy. The recovery process may take weeks, months, or years to understand the level of deficits incurred and regain function.

Clinical trials are research studies in which new treatments—drugs, diagnostics, procedures, and other therapies—are tested in people to see if they are safe and effective. Research is always being conducted to improve the standard of medical care. Information about current clinical trials, including eligibility, protocol, and locations, are found on the Web. Studies can be sponsored by the National Institutes of Health (see Clinicaltrials.gov) as well as private industry and pharmaceutical companies (see Centerwatch.com).

craniotomy: surgical opening of a portion of the skull to gain access to intracranial structures and replacement of the bone flap.

ICP monitor: a device used to measure intracranial pressure inside the brain.

stereotactic: a precise method for locating deep brain structures by the use of 3-dimensional coordinates.

ventricles: hollow areas in the center of the brain containing cerebrospinal fluid.

ventriculoperitoneal (VP) shunt: a catheter placed in the ventricle of the brain to drain excess cerebrospinal fluid.

Through our affiliation with premier hospital systems in the Greater Cincinnati-Northern Kentucky region, Mayfield doctors care for people who have brain aneurysms, brain hemorrhages, blocked carotid arteries, moyamoya, vasospasm, and related diseases. We work collaboratively with neurologists, neuroradiologists, and neurointensivists to bring you the very best care available.

Dr. Andrew Ringer, a neurovascular specialist at Mayfield Brain & Spine, gives us 7 steps you can take to reduce your risk of stroke. He concludes by telling us how we can recognize the signs of stroke F-A-S-T.